Best three-fold picks to bank on for Sunday

Football league matches continues across the world on Sunday which will round up football matches this weekend.

After in-depth analysis, we’ve picked three matches that can be banked on by punters. 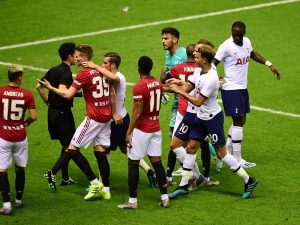 These are two titans from the Premier League, and either team harbor ambitious objectives for this new season. And there’s also a rich history between the two clubs. The most prominent factor fueling the rivalry would be the fact that Jose Mourinho’s previous gig was with the Red Devils, before being sacked.

Meanwhile, Ole Gunnar Solskjaer’s men are determined to put an end to the domination of their two arch-rivals. They could not go another campaign without a title.

However, competition is at its very peak, and even one dropped point could cost them at the end.

Likely, we can count on the Devils to come out with guns blazing this weekend. Moreover, a win against a major team like the Spurs would also be a confidence-booster going forward.

In the meantime, after an appearance in the Champions League final in 2018-19, Mourinho’s men had underachieved a bit the last season. They are now in the Europa League, and had to settle for only a sixth-place finish in the PL.

This seems to have motivated them to have a vastly different campaign this time around. They are now in much better form, and have built up quite some momentum.

They are expected to give Solskjaer’s men a great fight.

All arrows point towards a high-scoring thriller at the Old Trafford. Going on, h2h encounters between the two teams have also had goals in plenty, and considering all these factors, expect another one of these high-scoring games this weekend.

Barcelona hasn’t conceded in both their fixtures this term in the league. Their opening match was at home and they took all three points from Villarreal with a 4-0 scoreline. Just when we thought they would have a slip up away from home, the FCB defeated Celta Vigo with a 0-3 scoreline.

Sevilla is back after the loss in the Super Cup against Bayern Munich in the finals. The visitor is on a two-game winning streak in the campaign and will visit on the back of a 1-0 win at home against Levante in the previous league clash.

Los Palanganas is tagged with Barcelona in the table as it stands with 6 points for each, but they can probably expect an end to their winning streak on Sunday night.

Lionel Messi has been the powerhouse for the home team, despite his indifference with the management over slight issues in the camp. However, we can expect another magical show from the Argentinian striker on Sunday night.

With Messi at the spotlight, there is no doubt that the home win in full-time is the most probable result at Camp Nou. The host had lost their title last season to Real Madrid and will aim to reclaim it back. So, we can expect the Catalonians to give their all in this season of La Liga.

The reigning Italian champions have slipped last week against Roma, so they are already two points behind Atalanta, AC Milan, Inter Milan and Napoli.

Even though they got only one point, Andrea Pirlo is surely happy with the outcome of that match against AS Roma. Juventus had only 10 players on the pitch for 30 last minutes after Rabiot got sent off.

Cristiano Ronaldo did some of his magic and set the final 2-2 result in 69th minute. Juventus had a great first game of the season at home when dispatching Sampdoria 3-0.

There is no doubt it will take some time to settle everything after departures and arrivals during the summer, especially the position covered by Miralem Pjanic who moved to Barcelona.

Unlike the Old Lady, Napoli have maintained win rate at 100% so far. They demolished Genoa at home 6-0 last weekend, while premiere match against Parma on the road ended 2-0 in their favour.

Hirving Lozano and Dries Mertens are going to be the biggest threat for Juve – these two players have already scored four goals total. We don’t think things will go smoothly for hosts here.

Gennaro Gattuso is a great motivator, while his roster remained pretty much the same. Draw or away win double chance seems like a good choice for us, which is priced at 20/21 odds by Bwin.