Another weekend of exciting football matches rolls around, so we have picked three bets which can be banked on by punters for Friday.

Fiorentina were involved in one of the best matches italian football offered last week, despite losing to Inter Milan 3-4.

Their fans are surely hoping to see another attacking performance like that, but as well hope their team close the gaps in defence and concede significantly less goals.

After all, the team from Firenze is hoping to battle for Europa League this season. Sampdoria had an awful start to the new football campaign, and are still looking for the first points.

Fiorentina achieved some incredible results during the pre-season. Guiseppe Iachini’s squad scored 15 goals in the last three test games, and won the first official game against Torino 1-0 at this stadium. In the above mentioned clash against Inter Milan, Florentina had the lead on two occasions. They were actually ahead until the 87th minute. Franck Ribery was phenomenal at Meazza, providing two assists. We are expecting him to once again be super-dangerous on the wing and help Fiorentina to win this match.

Sampdoria’s start in Serie A has been catastrophic so far. Loss to Juventus in Torino was expected, unlike home defeated to Benevento last week 2-3 FT. We think they will go down in Firenze but should at least find the net.

The BTTS is priced 7/10 odds by Novibet 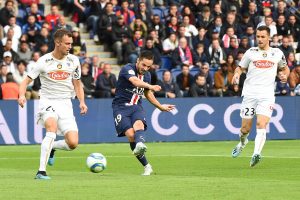 This Friday night Ligue 1 game will see the champions PSG take on Angers and with all their major stars back again this should be an easy 3 points for Thomas Tuchel’s side.

PSG did start the league slow by losing their first two games and this has given the other clubs some rare hope. Rennes are the current leaders with 13 points from their first 5 games and currently hold a 4 point lead over PSG, but not many people will believe that will last for too long.

Still at least the league has looked different in the first few weeks and that will be welcomed. PSG are going to be big odds on to win this game and so we must look into different markets for better value. PSG come into this game having won their last 3 in a row and their last match was beating Reims 2-0 away from home.

Angers are in 8th and have the same points as PSG but they haven’t been as consistent and currently have a pattern where they win one week and lose the next. Though their last game was a 3-2 victory over Brest. This was impressive as they were losing 2-1 and scored two quick second half goals to settle the tie. If anything they will come here with a spring in their step.

What we have to remember is that Angers last away game ended in a 4-1 defeat against Montpellier.

We expect BTTS to score here as three of this last four fixtures have seen both teams get on the score sheet, and it’s priced at 43/40 on Bet365

The Iron Ones secured a 1-1 draw on the road the last match-day, against Borussia Monchengladbach. The fact that they were able to do so, against one of the best teams in the league is really a confidence-booster.

In the meantime, Jan-Moritz Lichte’s men lost 1-4 at home the past game week, against Stuttgart. With that defeat, the team has now extended their 100% losing record in the competition for another game, and have conceded three or more goals in both their fixtures till now.

They have also lost five of their former six overall match-ups, and their single win this whole season had come against a team from the lower division.

On the other hand, their counterparts have lost just thrice at home this whole year, and more importantly, the Iron Ones have been unbeaten in h2h clashes in the past 17 years.

They have also been delivering far better performances than that of the 05ers in the past several months. As such, expect Union Berlin to win at least one of the halves this weekend.

However, understand that every single h2h encounter since 2003 have had goals from both teams, and not once have the hosts kept a clean sheet at this venue in any face-to-face game in the 21st century.

Also, Lichte’s men would do their absolute best to avoid a third straight defeat in the league. Likely, expect Mainz to find the back of the net at least once.